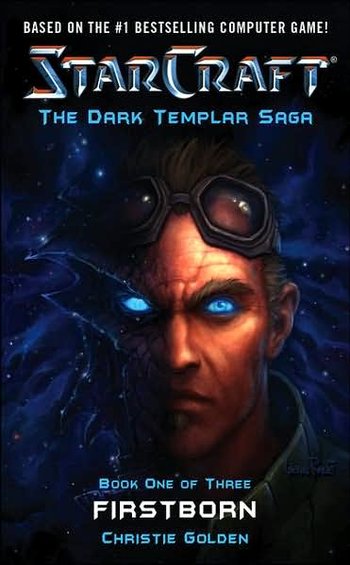 StarCraft: The Dark Templar Saga is a trilogy of novels in the StarCraft Expanded Universe, set between StarCraft: Brood War and StarCraft II. They were written by Christie Golden and published from 2007 to 2009.

Archaeologist Jake Ramsey is called away from a dig at the behest of Valerian Mengsk, Crown Prince of the Terran Dominion, who wants him to investigate the ruins of a Xel'Naga temple of the same type the Dominion previously encountered in Star Craft Shadow Of The Xel Naga. Paired up with hardened mercenary Rosemary Dahl as his bodyguard, Jake and his team set to work. Deep inside the ruin, though, Jake discovers the body of a protoss archivist named Zamara, stuck in suspended animation at the edge of death for decades. In her desperation to live, she transfers herself into his body. Wanting the information Zamara possesses, the Dominion turns on Jake, forcing him and Rosemary into flight for their lives, while Zamara begins to show to Jake the stories of how the protoss came to be what they are now. Worse yet, they attract the attention of Sarah Kerrigan, the Zerg Queen of Blades, and the insane dark archon Ulrezaj.

The story of the trilogy was written alongside that of StarCraft II.

Books in the trilogy: