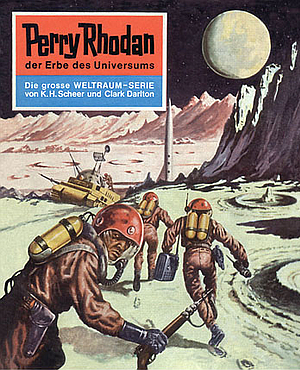 Perry Rhodan is a weekly German Science Fiction Pulp Magazine series that has run uninterrupted since 1961, with over three thousand one hundred issues released so far not counting reprints, books, and spinoffs. It was originally founded by Karl-Herbert Scheer (1928-1991) and Walter Ernsting (1920-2005), two German science fiction writers, and initially only conceived to run for thirty volumes. It is being developed and written by an ever-changing team of authors.

The series begins with the first manned moon landing (in 1971) led by U.S. Space Force Major Perry Rhodan. However, things do not go as planned and the astronauts discover a stranded alien spaceship from a star system called Arkon and its crew who need medical help. The realization that mankind is not alone in space and access to the aliens' advanced technology lead to the (not entirely trouble-free) political unification of Earth under the eponymous hero-protagonist Rhodan, first expeditions into the cosmic neighborhood, and the eventual founding of first colonies on other planets, all the while trying to keep the more powerful established factions out there (especially the decadent Empire of Arkon, which had dominated local space for twenty millenia) from finding out just where the newcomers hail from.

Over time (over the course of the entire series so far, more than three thousand years pass in-universe), Earth and its colonies evolve into a major power in their own right while other space-faring races lose some of their traditional influence. It is revealed that all the various human races of the Milky Way galaxy — such as Terrans and Arkonides (who had founded a short-lived colony called Atlantis on Earth roughly 8,000 B.C.) — are closely related and technically part of one species. They are descendants of the Lemurians, the First Mankind, who fled Earth 50,000 years ago during a galactic war with an alien species and settled in Andromeda.

Several major outside threats are faced and eventually defeated, alien races are discovered and befriended as allies, then a successful invasion of extragalactic origin forces the Terrans to flee along with their home-world. That event kind of marks the turning point towards events of more "cosmic" significance and contact with high-tech civilizations and cosmic entities far ahead on the Kardashev Scale... and that only covers the issues up to about #700-#800.

Published in Germany as:

And there was NEVER a movie! Especially not one made in 1966.

The American release was published in The '70s in a paperback book format by Ace that contained other material, making it resemble a magazine; after this series was cancelled a few more issues were directly sold by Forrest J. Ackerman. This lasted up to issue #145 (German numbering). An English translation of Neo started in 2021, which currently has 6 volumes released.

There is a character sheet for more details.

There are summaries for the arcs of the series. (work in progress)

There is a dedicated German wiki

Tropes used in the Perry Rhodan series include: