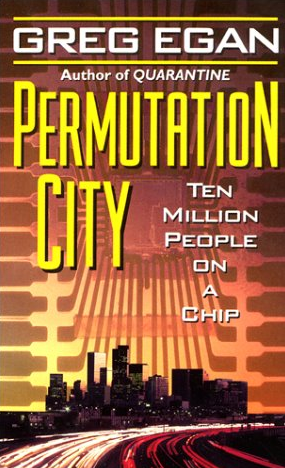 Permutation City is a 1994 Sci-Fi novel by Greg Egan which deals with the philosophical issues surrounding Mind Uploading and the creation of artificial life in simulated universes. For its use of a rich array of concepts from science, mathematics and computer science which paint a believable and self-consistent world, it's known as one of the hardest Sci-Fi novels associated with the Cyberpunk genre. It is also one of the most influential pieces of fiction on the Transhumanist movement.
Advertisement:

In mid-21st century, humanity has the technology to scan a human being's brain and create a virtual copy of them who, by virtue of containing the same information as the original brain, has subjective conscious experience and views himself/herself as a continuation of the original person. Those Copies (with a capital C) live in various VR environments which run on a vast global cloud computing network, the processing power of which is bought and sold through an online marketplace called QIPS Exchange ("QIPS" stands for "quadrillions of instructions per second"). While many of the Copies have originally been terminally ill people for whom being scanned was the only chance to keep on existing, others are back-up versions of rich individuals who like the idea of keeping on living indefinitely. The class differences between different Copies are manifested in the level of detail in their virtual worlds and the speed with which they're being run.

Another endeavor which uses a large slice of the QIPS market is the Autoverse - a cellular automation designed to simulate some weird form of artificial chemistry and, through it, virtual life. The Autoverse provides diversion to a community of programmers who work on it in their spare time, their current main goal being to find a way to make the only virtual life form synthesized so far, Autobacterium lamberti, to evolve.

It seems, however, that the Autoverse junkies would have to put their hobby on hold, since a project named Operation Butterfly is buying out virtually the entire QIPS market. This initiative is meant to mitigate the devastating climate change-caused typhoons that have been hitting south-east Asia lately. It means to do so by turning the Butterfly Effect on its head—if small perturbations in a chaotic system might have a difficult to predict, far-reaching effect, then by creating a detailed enough simulation of Earth's atmosphere and oceans, one might determine which subtle changes in the water temperature might prevent the appearance of typhoons. Naturally, Operation Butterfly is a threat to the thanatophobic billionaire Copies. As beings who don't have legal rights, the world's governments might decide that the resources used to maintain their continued existence might better be redirected towards saving the lives of "real", fleshy human beings. And this is where a mysterious financial service salesman named Paul Durham enters the picture. For a fee which is pretty meager for a billionaire but large enough to buy a whole lot of QIPS, Durham offers to relocate the copies to a sanctuary in which, if his radical metaphysical theory works, guaranteed immortality is only the tip of the iceberg.

, which he has proposed four years later.