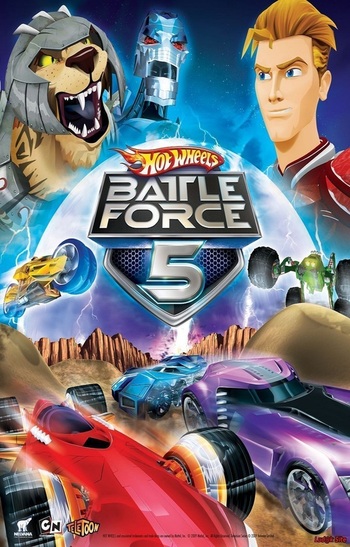 Never mind that there are eight of them, Battle Force Five just sounds cooler. Or they're trying to appeal to a Japanese market.
"Speed, power, and attitude, dudes. Let's roll."
— Vert Wheeler
Advertisement:

What happens when Nelvana teams up with the studio behind Dragon Booster, Storm Hawks and League of Super Evil to produce a cartoon series based on a popular line of toy cars from Mattel?

You get Hot Wheels: Battle Force 5, a Merchandise-Driven Canadian animated series that takes every Saturday Morning action cartoon trope in the book that the producers could track down and pumps it chock-full of that Rule of Cool-and-Rule of Fun-driven philosophy that Nerd Corps action cartoons practically run on.

Much like its predecessor, Hot Wheels: AcceleRacers, Battle Force 5 follows Vert Wheeler (albeit a new version of the character), a vehicle enthusiast who gets caught in a mysterious electrical cyclone while out for a drive in the desert one day. The cyclone turns out to be a portal that whisks him away to a mysterious dimension called a Battle Zone, where he encounters a being named Sage, who helps him return to Earth. At Vert's garage, Sage reveals she is the last of a powerful race called the Sentients, who created the Battle Zones as a way to link the multiverse together. However, the Battle Zones are now threatened by two evil factions - a race of beast-men called the Vandals and the robotic Sark - both of whom seek to acquire Battle Keys that allow the user to use the Battle Zone they were found in to invade other dimensions.

To stop these two separate menaces from threatening Earth, Sage assembles five others to help Vert, these being off-road tracker Agura Ibaden, Muay Thai martial artist Zoom Takazumi, minor British prince Stanford Rhodes, and engineer brothers Sherman and Spinner Cortez. Together, these six racers form Hot Wheels Battle Force 5 (five because they have five vehicles between them; Sherman and Spinner share one), driving through the various Battle Zones to compete with the Vandals and the Sark for Battle Keys and securing them so that the Earth will remain safe from these dangerous interdimensional foes.

The show debuted in August 2009 both on Cartoon Network in the United States (as one of a multitude of Canadian cartoons prominent on the channel at the time, being Nerd Corps' third and final CN series and Nelvana's first one) and Teletoon in Canada, with the final episode airing on July 2011 and concluding the series at 2 seasons and 52 episodes. Episodes are available on Nelvana's Cartoon Power Up channel.