Western Animation / Rated "A" for Awesome 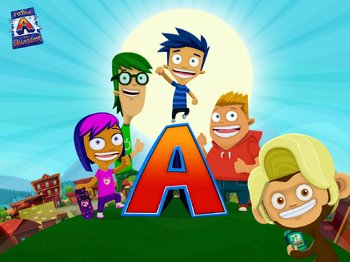 The show focuses on the adventures of the Awesomizers, a group of 12-year-old kids made up of stepsiblings Les and Thera Awesom, their friends Lars and Noam, and pet monkey Mr. Twitchy, as they strive to make anything that's lame or boring awesome.

As Nerd Corps' second comedy-focused show after League of Super Evil, Rated "A" for Awesome aired on YTV from September 3, 2011 to February 25, 2012, ending with a total of 26 episodes over a single season. As a result, it was their shortest-lived original series until Endangered Species. The series also appeared in the United States on Disney XD, becoming the second Nerd Corps show to appear on a Disney network after Dragon Booster, with Nerd Corps' next series, Slugterra, following in its footsteps after Storm Hawks, LOSE, and HWB5 all aired stateside on Cartoon Network.