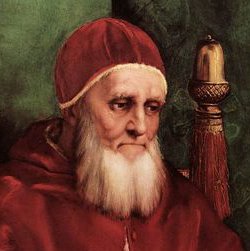 Julius II (born Giuliano Della Rovere, 5 December 1443 – 21 February 1513) was Pope from 1503 to 1513. The last Pope before Martin Luther kickstarted the Reformation, one could say that like his predecessor (and hated rival), he contributed to the triggering of it, though in certainly different ways.

Most people believe the Vicar of Christ on Earth should never pick up a sword and never even get close to military affairs. Julius II wasn't most people. Starting his career as a humble priest of an Impoverished Patrician family, he was mentored and aided by his uncle, Pope Sixtus IV, who gave him the position of Bishop and subsequently Cardinal.

With the death of Pope Innocent VIII, he and Rodrigo Borgia were the two principal candidates for the Papal Chair, and they both fiercely attempted to sway the college of cardinals to their side in the subsequent conclave, by any means necessary (read: bribery). Della Rovere lost, and Rodrigo Borgia ascended to become Pope Alexander VI. Thus a virulent rivalry between the two men was born.

Della Rovere spent Alexander VI's entire papacy attempting to destroy or dethrone him (preferably both), going to such lengths as causing a war between Italy and France in an attempt to destroy the Borgia Pope, making himself the most dangerous and determined adversary of the Borgia Family. He was unsuccessful in all attempts, but in 1503, Lady Luck smiled to Giulliano Della Rovere: Alexander VI died.

But he bided his time. Pius III, elected Pope shortly after Alexander's demise, died less than a month after ascending to the Papal chair, leaving the Papal chair ripe for the taking. In the subsequent conclave, Giuliano made a truce with Alexander VI's son, Cesare Borgia, and became Julius II.

Upon becoming Pope, Julius II proceeded to smash apart all the political power the Borgias had achieved in Alexander VI's papacy, made Alexander VI an Un-person and imprisoned Cesare Borgia (who died not too long thereafter). But the career of Julius II would only get more dramatic: Clad in armor and waving a sword, he took to the battlefield and led the Papal troops himself, warring against the Venetians with great success and later against the French also successfully. He was called "The Warrior Pope" or "The Fearsome Pope". His victories completely changed the history of the Papal States, establishing a structure that would exist until the 19th century and kept Italy mostly free from foreign influence.

He was also a patron of the arts, responsible for ordering many of the greatest masterpieces of the Renaissance (most famously those of Michelangelo Buonarroti) and the main reason Rome became such a cultural capital.

He died of a fever in 1513, and was replaced by Giovanni di Lorenzo de' Medici, aka Leo X. A common point of speculation is what would have happened if he had lived long enough to react to the Reformation.