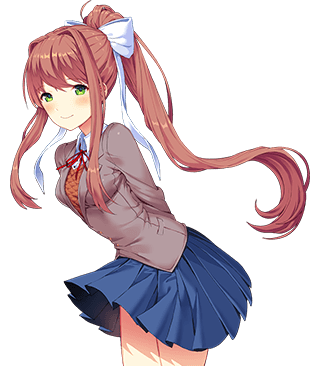 Monika wants to spend some time getting to know each other better, just you and her.
Advertisement:

A common pose for young ladies to show they are interested in someone, but in a subtle way rather than being overtly seductive. This is Truth in Television, which makes it a good characterization visual in fiction.

The common form is to hold her arms behind her back (which by itself is a common pose for shy girls, and it's the key here to making her not look too forthcoming) and tilt her head coyly, while either leaning forward or walking towards the person she's interested in. Bonus points if she is standing just a bit off angle.

She could be doing this to get a guy to sleep with her, but just as often she wants a date, or just likes a guy doting on her (without having to resort to attention whoring).

This can exploit the notion that Women Are Delicate when a girl uses it to help get a guy comfortable with her.

A Sub-Trope of Delicate Is Beautiful. Often used as a Modeling Pose.

Contrast All Women Are Prudes, The Ingenue, The Vamp.