Music / Songs of the Humpback Whale 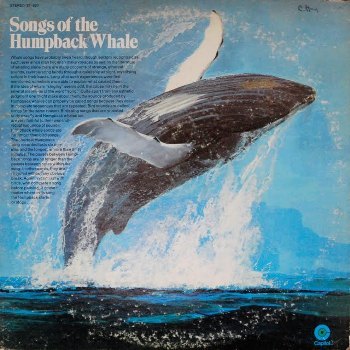 Songs of the Humpback Whale is a 1970 album released by Capitol Records with nothing but sounds of singing whales. It is credited to zoologists Roger Payne, Katie Payne and Frank Watlington.

The album was made available thanks to American zoologist Roger Payne who had studied whale sounds in the 1960s. At first he was merely interested from a scientific point of view, but after a while he actually began to see it as "music" on its own. He described it as: "exuberant, uninterrupted rivers of sound". Whales happen to create long repeated themes and a group of male humpbacks will similtaneously vocalize a song, which can last up to 30 minutes, even more than 24 hours sometimes! He recorded the sounds with the use of a “hydro-phone” microphone created exclusively for the recording of sounds underwater. Payne discovered the singing was used as a way of communicating and that it actually had complex communiqués which occur in exact and repeated sequences. Frequent research ever discovered that the whale songs also change over the course of time, having different timbres and textures than those recorded decades earlier.

National Geographic magazine gave away a free flexidisc with male humpback whale songs in 1969, recorded off the Bermuda coast. Despite its Audience-Alienating Premise (no human input, no instruments, no lyrics, no danceable beats and no singing either) it was such a success that biologist Roger Payne, his then wife Katie and colleague Frank Watlington were asked to release it as a full LP. It quickly became one of the unlikeliest bestsellers ever. Until the release of this album many people were unaware that whales produced sounds under water. The album quickly became a staple of the New Age movement and used during Yoga relaxation. The record even had a sociological impact. It inspired the "Save the Whales" movement and by 1986 the International Whaling Commission came into effect, prohibiting whaling worldwide. Only Norway and Japan refused to sign.

In 2010 this entire album was inducted into the National Recording Registry for being "historically, culturally and/or aesthetically important."