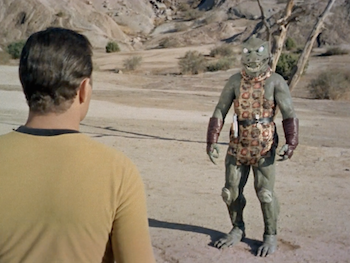 The Enterprise is invited to visit an outpost near the edge of Federation space; Kirk, Spock, McCoy, and three Redshirts beam down at the outpost commander's behest — only to discover that the invitation is a pre-recorded ruse; the outpost has been destroyed.

Almost immediately Kirk and co. are beseiged by unseen aliens. Simultaneously, the Enterprise is attacked in orbit by an alien vessel, so the away team cannot beam up. Two of the Redshirts are killed (one is allowed to die offscreen), but Kirk finds a mortar-like weapon among the rubble and manages to repel the alien attackers. Beaming back up to the Enterprise, Kirk initiates a pursuit of the alien ship, which was clearly responsible for the outpost's destruction, and he means to avenge that attack.

Kirk finds himself out at Kirk's Rock, sans weapons but with a recording device/universal translator/short-range transciever, where he is to engage in a Forced Prize Fight To The Death with the alien captain (called a Gorn, and no, it's not that kind of Gorn), with the loser's ship also being destroyed in the bargain. Kirk has no weapons but is told that the environment has been "prepared" with everything he might need to make one. Kirk quickly begins casting about for a phaser or some sort of technological gizmo as the Gorn captain (a huge reptiloid creature) comes after him. Just for good measure, the Gorn is not only bigger than Kirk, it is much stronger and tougher as well.

The Metrons, by means of their Sufficiently Advanced-ness, somehow allow the Enterprise bridge crew to follow the action on their viewscreens (and presumably the Gorns as well). As Kirk futilely fights off the Gorn, the Gorn raises the accusation that the outpost was in Gorn territory and that they thought it might be the foothold of a Federation invasion — a possibility which shocks McCoy, thinking that the Federation might actually be in the wrong this time. Despite Kirk's denial of the accusations, the Gorn keeps coming, relentless and seemingly unstoppable.

Finally, an exhausted and nearly defeated Kirk begins to notice the various mineral deposits all around, and eventually recalls that these can be used to formulate a crude form of gunpowder. Kirk quickly assembles a makeshift mortar using a bamboo shoot and crystal shards for bullets as the Gorn approaches, firing it off Just in Time. The Gorn is pierced, and falls immobilized and helpless.

Kirk is the victor and is ready to deal the death stroke... and abruptly announces to the Metrons that he refuses to kill the Gorn, whom Kirk believes was only defending his territory. An image of a Metron appears and expresses surprise at Kirk's mercy, noting that were the tables reversed, the Gorn would not be so merciful. "You are still half-savage. But there is hope."

Recapper's Note: According to Word of God, the Forced Prize Fight was indeed a Secret Test of Character, but not quite as it comes across: The script includes a bit of dialogue (not aired) which reveals the Metrons had planned to destroy the winner of the fight rather than the loser, considering the winner to be a bigger threat to them. Luckily for us, Humans really Are Special. (The line is, however, included in the novelization by James Blish.)

Compare to "Duel", an early episode of Blake's 7 that is practically a remake of this story.

. The Kellam de Forest Research Agency, which handled all ST scripts, noted the similarity. Desilu got permission from Brown, not telling him Coon had already written the script, but paying him a fair price and giving him screen credit.