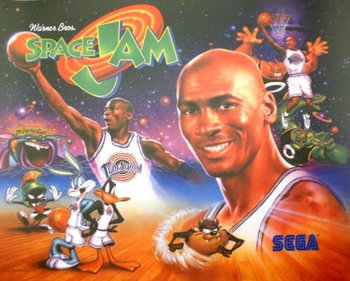 Space Jam is a Licensed Pinball Table released by Sega Pinball in 1996, illustrated by Morgan Weistling and designed by Joe Kaminkow, Orin Day, and Lonnie Ropp.

Based on the Warner Bros. movie of the same name, this is a lighthearted romp where Basketball superstar Michael Jordan teams up with Bugs Bunny and the Looney Tunes stable to play ball against the evil alien Monstars. Make baskets into the magnetic hoop for multiball and extra balls, race with the Road Runner and the Tasmanian Devil for the Fast Break, then get on Fire and score some ten-pointers. Get the Rebound, complete the Slam, and get In Yer Face, then light all seven planets and start the Final Jam with Number 23 himself.

Like the movie itself, Space Jam is considered by many as a decent Guilty Pleasure, with So Okay, It's Average gameplay spiced up with an original playfield and marred by Sega's small arcade marketshare. While it has not been Vindicated by History, the game did find new life several years later, when it was revised and re-released as NBA.