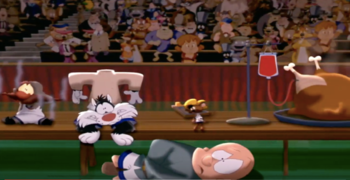 After all these years of slapstick, this was the moment of serious injury.
Advertisement: