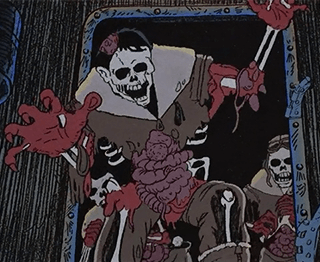 There's a good chance you may never look at a B-17 Bomber again without shuddering.
"Once you see that shit, it'll fuck you up for life!"
—Twink, Sausage Party
Advertisement:

Just that cartoons don't depict the same realism as live-action doesn't mean you won't get scared.