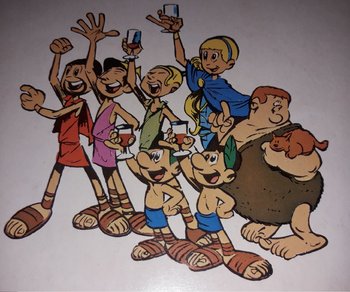 The main characters. Back, from left to right: Hermes, Idas, Atalanta, Jason, and Hercules with Odipoes. Front row: Castor and Pollux
De Argonautjes (The Argonauts) is a Dutch comic series created by Lo Hartog van Banda en tekenaar Dick Matena as a parody on the Greek myth of Jason and the Argonauts. It consists of 14 albums and a prologue. The series is clearly inspired by Asterix.

Set in Ancient Greece, the series follows the misadventures of the sons and daughters of the original Jason his crew, as they travel around Greece in a new version of the Argo.