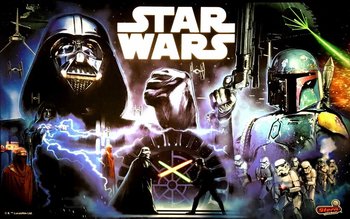 May the Force be with you.note Original Premium edition backglass shown
Advertisement:

Star Wars is a 2017 pinball machine, designed by Steve Ritchie and released by Stern Pinball.

The game uses the first three films in the Star Wars franchise as its source material, and casts the player in the role of one of their main characters (Luke, Leia, Han Solo, or R2-D2). They then proceed through various modes, re-enacting many of the trilogy’s most memorable events in the process, in the hopes of ultimately starting Jedi Multiball. Furthermore, there are several bonuses they can obtain, depending on their choices (primarily their character) and skill (primarily various Score Multipliers). Other features of note include models of a TIE fighter and the Millennium Falcon on the playfield, as well as the Death Star. (Premium and Limited Edition games have a moving Death Star, as well as a special hyperloop ramp.)

During San Diego Comic Con in 2019, Stern announced a home version (officially titled Star Wars Pin). It has a different layout (shared by the previous home edition of Spider-Man and the limited-run Supreme) that is more stripped-down and economical. Later that year, they also announced new versions of the Pro and Premium models with comic-styled art by longtime Lucasfilm illustrator Randy Martinez. In late 2020, this was followed by a "Comic Art" version of Star Wars Pin.

Not to be confused with any other pinball machines based on Star Wars.