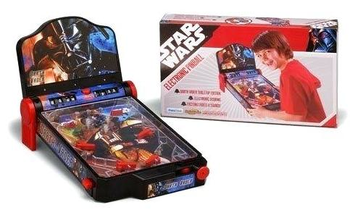 These are not the pinballs you're looking for. Move along.
This is a disambiguation page for Pinball games based on Star Wars. Choose from the following:
Advertisement:
In addition, the following Star Wars pinball games currently do not have pages on this wiki:

If an internal link led you here, please change it to point to the specific article. Thanks!