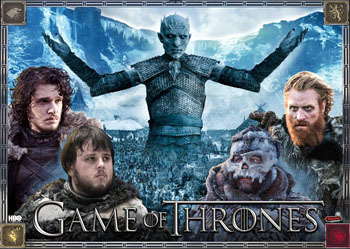 When you play the Game of Thrones, you win or you tilt.
Advertisement:

Game of Thrones is a 2015 pinball game released by Stern. Designed by Steve Ritchie, illustrated by Greg Freres and Steven Martin, software by Dwight Sullivan, and music and sound effects by Brian Schmidt, it retells the story of HBO's popular television series in flipper form.

The player is cast as a member of one of Westeros' seven Houses — Stark, Baratheon, Lannister, Greyjoy, Tyrell, Martell, or Targaryen. Challenge the other Houses and unite them under your rule, then try to survive long enough to rule Westeros. As Winter approaches, gather Wildfire, hit the Battering Ram, then collect Gold for Awards to strengthen your position. Leap into battle at Blackwater, master the Sword of Multiball, and fight the Dragons, but beware the Dothraki Horde when Winter comes. Follow The Hound's instructions and you can become the Hand of the King, but only the most hardy will ascend to the Iron Throne.

As with many other Stern pinballs, Game of Thrones is available in a standard ("Pro") version as well as Premium and Limited Editions. The deluxe editions add an upper Castle playfield with its own set of objectives, an elevator to ascend the Wall and reach the Iron Throne, and improved lighting and animation. The differences are more than superficial; consensus is that the basic table is a fast, frantic game that's forgiving enough for beginners, while the deluxe versions are a slightly slower — but much harder — game for veterans.

The Game of Thrones pinball demonstrates the following tropes: