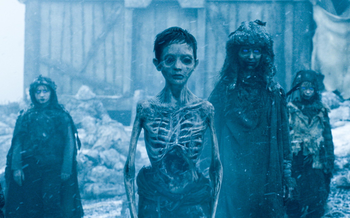 G’night folks.
"There is only one hell, Princess. The one we live in now."
— Melisandre
Advertisement:

Remember all the Nightmare Fuel that A Song of Ice and Fire had? With Game of Thrones, it's now in live action. Enjoy.

is a series of official artworks by artist Robert M. Ball, one for each episode of the show, that portray one or more characters' deaths from that episode in a symbolic manner. They're certainly beautiful, but ye gods, are they terrifying. Some of the highlights: