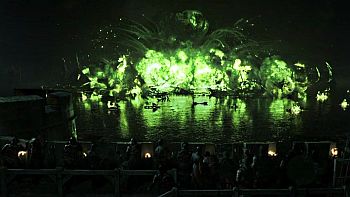 Money shot.
"The man who passes the sentence should swing the sword."
— Eddard Stark
Advertisement:

You don't get to become HBO's most popular show ever by not being one powerful series. Here are the moments that show just why.

WARNING: Per wiki policy, all spoilers are unmarked on Awesome Moments pages. As such, this page will contain no spoiler markings of any kind. If you have not watched an episode, read at your own risk.

And this time, unlike in Tyrion's wedding, Tywin attacks Joffrey's Evil Gloating instead of bothering to correct Tyrion. Tywin may never vocally approve of anything Tyrion says, but he nevertheless proves himself above Joffrey's level of evilness. And who's to say that Tywin doesn't see a bit of Aerys II in Joffrey when he looks his grandson in the eyes and says what everyone thinks to his face?
Joffrey: [to Tyrion] I am the king! I will punish you!
Tywin: Any man who must say, "I am the king" is no true king. I'll make sure you understand that when I've won your war for you.