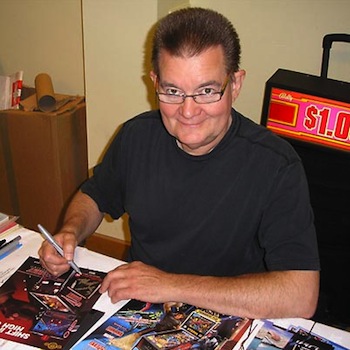 The Master of Flownote  Alternative: "FINISH HIM!"
"I get into how the ball moves. I make smooth-playing games. I like every shot to be smooth and fluid. Once you make a shot, it comes back to the flipper and you can make another shot; we call them combos."
—Steve Ritchie summarizing his design philosophy in a making-of video

Steven Scott Ritchie (born February 13, 1950) is an American arcade game designer, an industry veteran who is most reknown for his Pinball games.

Ritchie joined Atari in 1974 as an electro-mechanical technician, but soon advanced to their fledgling pinball division and worked with Eugene Jarvis on Airborne Avenger and Superman. Before the latter was released, however, Ritchie moved to Chicago and joined the prominent pinball company Williams Electronics. There, he developed an extensive list of renown pinball machines, including Flash, Firepower, Black Knight, High Speed, Terminator 2: Judgement Day, and Star Trek: The Next Generation.

Ritchie has also helped in the development of many video games for Bally and Midway, and provided the voice of Shao Kahn in Mortal Kombat II and Mortal Kombat 3. During the Turn of the Millennium, he returned to the pinball industry to work for Stern Pinball, beginning with 2003's Terminator 3: Rise of the Machines. He was initially a contractor with his own company (Steve Ritchie Pinball

, or "SRP") before becoming a full-time employee of Stern. On August 2nd, 2021, Jersey Jack Pinball announced

that he had joined the company.

Steve Ritchie is known as "The Master of Flow" by pinball enthusiasts, as his playfield designs heavily favor fast ball speeds, large loops, and associated combos. He is an avid fan of PC gaming, motocross racing, and street motorcycles. He is married to Dianne Ritchie, and is the older brother of fellow pinball designer Mark Ritchie.