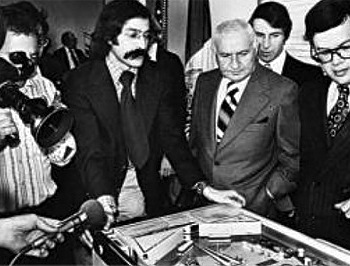 Sharpe and the Skill Shot that saved pinball.
While other Pinball Creators are recognized for their participation in making Pinball games, Roger C. Sharpe is universally recognized as the most important player ever in the hobby.
Advertisement:

In 1976, Sharpe was working as a writer and editor for publications such as GQ and The New York Times when he was called to appear in a courtoom in Manhattan. The Music & Amusement Association was attempting to overturn New York City's thirty-four-year ban on pinball machines,note The city treated them no different than slot machines and other gambling devices and Sharpe — one of the nation's top players at the time — was their star witness. Under scrutiny by the city council and local media, he eloquently argued that the ban should be overturned on the grounds that pinball was not a game of chance, but required patience, reflexes, and skill.

Sharpe began to prove his assertion by playing a demonstration game on a tablenote El Dorado by Gottlieb provided by the MAA. The Chairman, suspicious of tampering by "the pinballers", demanded that he use a backup machinenote Bank Shot, also by Gottlieb instead. Although he had never played it before, Sharpe proceeded to do so, pointing out the strategies a player would need to maximize the score, while showing off his ball control and aiming skills. However, despite this demonstration, the council remained skeptical.

In a desperate move, Sharpe allowed the current ball to drain, then declared that he would prove pinball was a game of skill by launching his next ball through the lit center lanenote out of five available at the top of the playfield. He then gently launched the ball, which flew straight into the lane he called. The Chairman immediately declared that he had seen enough; New York City's ban was quickly lifted, prompting other municipalities to drop their bans as well.

Sharpe's involvement with pinball did not end there. In 1977 he wrote Pinball!, an illustrated history of the game that is still considered the Bible of the field. He went on to design several pinball machines for Game Plan, Stern, and Williams Electronics, and later became head of marketing at Williams. In the late Seventies, Sharpe, Steve Epstein, and Lionel Martinez started the Professional Amateur Pinball Association

to rank players and their best scores.

Sharpe served as the Licensing Manager for WMS Gaming through 2014, when he left to become the chief executive of Sharpe Communications, a creative services company based in Chicago. He remains active in the arcade industry as a hobbyist, collector, and speaker, and consults for pinball companies on licensing issues.