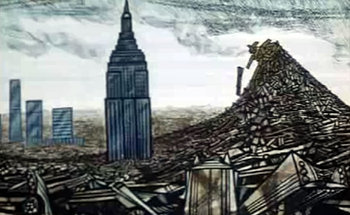 This is bad!
Advertisement:

It is a dystopian satire of the future, and particuarly, car culture run amok. Things aren't all bad; electricity is limitless and meals are reduced to pill form, eliminating the need to cook. However, all of humanity now lives in its cars—literally, everyone actually lives in cars, which are piled up on top of each other fathoms deep in the streets. It seems that people got a taste for longer and bigger cars, and cars got bigger and bigger and bigger until people were driving 40-foot behemoths. Cars were made specifically for special occasions like weddings and funerals; stroller cars operated by remote piloted babies around the streets. Eventually car traffic grew and grew until all movement ceased and humanity became stuck in their cars forever. But there's worse to come, thanks to the new scientific invention—self-replicating cars.