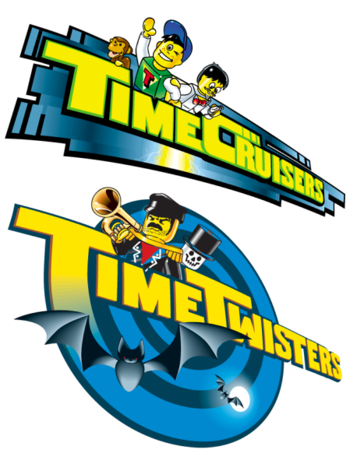 LEGO Time Cruisers was a rather short-lived LEGO theme that lasted from 1996 to 1997. It was LEGO's only attempt so far at building an entire theme around the idea of Time Travel. The story revolved around the adventures of Dr. Cyber, his young assistant and nephew Tim, their monkey Ingo and their robot Wacco who traveled through space and time using very bizarre-looking gadgets which were fueled by spinning Hypno-Disks. To travel to a specific time, these machines depended on the power of... hats! Historical hats — pirate hats, wizard hats, knight helmets, space gear, tribal masks, basically every type of headgear from other LEGO lines that the set designers could include.
Advertisement:

The theme's second year of production introduced an enemy faction called the Time Twisters, lead by the evil brothers Tony Twister and Professor Millennium. Their goal was to meddle with the past and steal items of value that they stored in their cylinder hats. Their crew consisted of skeletons and ghosts, for whatever reason.

Interestingly, the toyline was long predated by a comic series in the European LEGO magazine Klick Magazine. In 1994, Kim Hagen started illustrating Time Buster, in which Tim (then known as Max Timebuster) traveled through time and space in Dr. Cyber's Delorean-esque time machine to visit many different LEGO lines. International advertising for LEGO themes during this time also featured a character named Max Timebuster, depicted as an adult criminal who traveled through time to steal artifacts from various LEGO themes. In 1996, the comics were retooled to more closely match the newly-released LEGO theme, including changing Max's name to Tim and changing the time machine from a car to a flying boat, as well as letting Dr. Cyber join Tim on his travels. Starting in 1997, the LEGO magazine World Club Magazine ran a new comic series by Hagen, now based upon the misadventures of Tim and his monkey Ingo as they traveled through The Multiverse and visited many different LEGO lines, including LEGO Castle, LEGO Space, LEGO Adventurers, Aquazone, and Rock Raiders. These comics were discontinued after 2000.

Time Cruisers had a mixed reception, and nowadays mostly carries a negative connotation. "This reminds me of Time Cruisers" cry collectors every time LEGO puts out sets that on first sight look clumsily designed or just plain random. Indeed, most of the Time Cruisers sets looked like hastily slapped-together mishmashes of sets from various earlier lines than a theme of its own. There was no unifying design theme, other than the overabundance of play gimmicks. The sets had clashing, and often garish colors and the vehicles didn't quite resemble anything. In short, they looked more like random crap thrown together by a kid from his spare bricks, than an official LEGO line.

On the other hand, the Time Twisters faction's sets were better received, as they had an overarching and more-or-less consistent design style and color palette. Of course, these too had many playfeatues, but at least they looked like something. If the theme is fondly-remembered for anything, then it has to be the creative gimmicks (flapping wings, spinning gadgets, bouncing skull heads) and for its impressive collection of unique LEGO items. The designers took advantage of the concept to throw in as many interesting pieces as they could: besides the hats, there were magic wands, chromed swords, harpoons, crystals and trumpets, grails, dynamite, suitcases, and of course the ever-popular Orange Transparent Chainsaw. Even if they were questionable as models, there's no denying that the sets were good part-bags.

. Information on the World Club Magazine comics can be found here

Tropes seen in this LEGO theme :