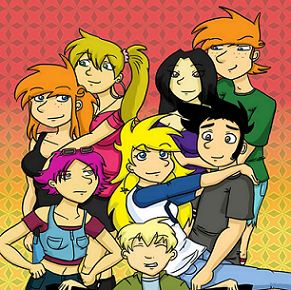 Juvenile Diversion is a Slice of Life webcomic, written and drawn by Heather Lebria and Dean Farrington, set during the 1980s. It chronicles the escapades of a group of hormone-driven teenagers running a local rock band (whose name provides the webcomic's title).

Of course, balancing this with their budding sexuality and conflicting relationships with each other and their families, as well as more mundane teenage issues such as school and homework, is going to be far from easy...

Because some content is NSFW, the SFW first page will be linked