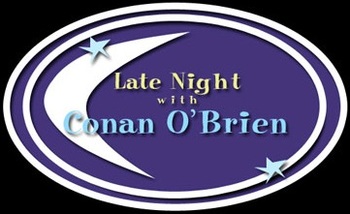 Late Night with Conan O'Brien is an American late-night Talk Show hosted by Conan O'Brien that aired on NBC between 1993 and 2009. From 1993 until 2000, Andy Richter served as O'Brien's sidekick; following his departure, O'Brien was the show's sole featured performer. The show's in-house musical act was The Max Weinberg 7, led by E Street Band drummer Max Weinberg.

In 2018 O'Brien announced that the entire series would be available for online streaming via his Team Coco website beginning in 2019. For whatever reason — most likely problems obtaining licensing for the musical guests' performances — this didn't come to fruition, but selected sketches and other clips can be found on the site's "Conan Classic" page, and the show's premiere episode is available in its entirely on Team Coco's YouTube page.

Tropes associated with Late Night with Conan O'Brien include: