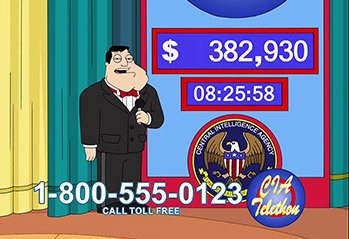 "Watch the telethon and even give some money to it, ya schnorrers."
— Midge, The Marvelous Mrs. Maisel
Advertisement:

Marathon television show, almost always broadcast to raise money for a charitable cause. Can run anywhere from 24 hours to a week or more of combined Variety Show and pointless filler.

The first telethon, broadcast by NBC in April 1949, was a fundraiser for the Damon Runyon Cancer Research Foundation. (In fact, NBC executive Sylvester Weaver coined the word "telethon" — a portmanteau of "television" and "marathon" — to describe the program, which was a radically different event that he hoped would entice people to buy TV sets.) The Foundation's first big fund-raiser, the telethon ran a then-unprecedented 16 hours with Milton Berle as its host, and raised $100,000. In all ways it was more or less indistinguishable from "modern" telethons, from the stars and celebrities who performed and urged donations, to the big on-screen bank of telephone operators taking calls.