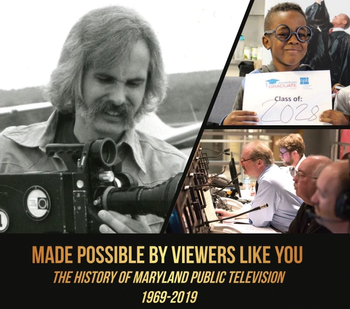 "If you watch even one second of PBS and don't contribute, you're a thief. A common thief!"
— Betty White, The Simpsons, "Missionary: Impossible"
Advertisement:

This trope is about two little things:

The Trope Namer is PBS, whose stations and original programs used to be funded almost entirely by viewers. (Some stations still are.) For this reason, most PBS programs still end their acknowledgements with "Made possible by financial support/contributions to your PBS station from... viewers like you." (Since November 1, 1999, they've been following this with "Thank you".) note  If they skip right to that, it's a sign production of the program has ended and viewers are just paying for the airtime. It's implied that's what contribution money from viewers is earmarked for to start with. Odds are, fewer viewers donate than not. People usually donate to PBS not because it helps keep the station running, but because neat "gifts" get thrown in (albeit for far more than the free-market rate), and because it's the PBS equivalent of Ratings: the sorts of programs that bring in heavy donations during pledge drives are the sorts of programs that the station will renew. Most of the grant money comes from airtime-hungry corporations, not-for-profit foundations, and the Corporation for Public Broadcasting ("A private corporation funded by taxpayers the American people").

See also Thanking the Viewer and Please Subscribe to Our Channel.

open/close all folders
Comic Books
Live Action TV
Web Original
Advertisement:
Western Animation
Real Life
TV Tropes has been brought to you by the support of Tropers like you. Thank you!
Feedback

In many of EmperorLemon's commentary videos, he would usually take the time to give shout-outs to some of his patrons who supported him through Patreon, as well as thanking the viewers for their time watching his videos.

In many of EmperorLemon's commentary videos, he would usually take the time to give shout-outs to some of his patrons who supported him through Patreon, as well as thanking the viewers for their time watching his videos.