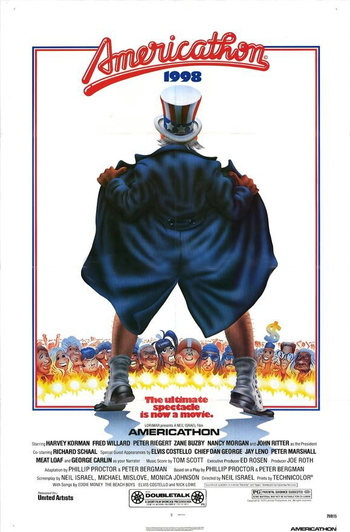 "If you plan to miss this movie, better miss it quickly; I doubt if it'll be around to miss for long."
— Roger Ebert, panning the film
Advertisement:

A satirical comedy from 1979, adapted from the play by The Firesign Theatre alumi Phil Proctor and Peter Bergman. Directed by Neal Israel, and featuring a cast that includes John Ritter, Harvey Korman, Peter Riegert, Fred Willard, Elvis Costello, Jay Leno, and (as the Narrator) George Carlin.

In the (then-future) year 1998, America is broke. The country has ran out of fuel and now everyone is living in their non-running cars and traveling by foot, skate, or bike. The President has to resort to selling the White House and moving into a sublet condo named the Western White House. Not only that, but the country is on the verge of foreclosure unless it can raise 400 billion dollars in 30 days. The solution? To have a non-stop telethon — or an Americathon — but those who would rather see the U.S.A. fall will stop at nothing to sabotage it.