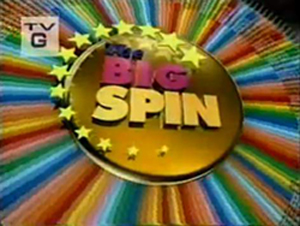 From the California Lottery, it's the biggest-money game show on Earth!

Think million-dollar top prizes on TV began with Who Wants to Be a Millionaire? Think again. From its start in 1985, until its conclusion in 2009, this California Lottery game show has had a top prize at or above the $1 million mark. How was it won? Players from all over the state who won on scratchers went up to a giant wheel with a ping-pong ball inside.

Other games included the 10-player elimination round to pick out a wheel-spinner from a pool of 10 people, and the Fantasy 5 Dream Machine, which is comparable to Plinko.