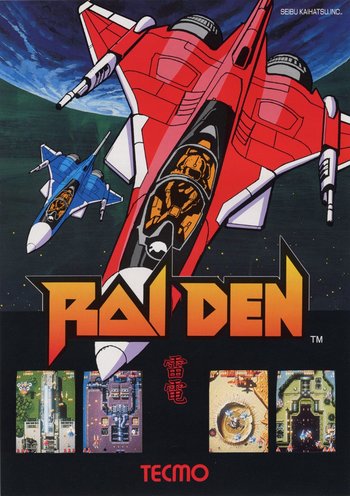 Raiden is a popular and influential series of vertical Shoot 'em Up created by Japanese developer Seibu Kaihatsu, and later handled by MOSS. It is quite notable for popularizing (though not necessarily creating) many concepts and conventions still used by vertical shmups today. Spawned the Raiden Fighters series.

The plot of the series is completely nonexistent (aside from V, which has a detailed story to flesh everything out) and inconsequential, much like most shoot'em ups. The gist is that a Hive Mind species of alien lifeform, the Crystals (called "The Cranassians" by the fan base), is invading Earth, and a world organization known as the VCD deployed a new weapon based on Crystal technology, the Fighting Thunder craft, to stop them and save the Earth.

Later ported as Raiden Trad on the Super Nintendo Entertainment System and Sega Genesis/Mega Drive, Raiden Densetsu on the Japanese PC clone FM Towns, and Super Raiden on the TurboGrafx-16 CD-ROM system. All other console releases were simply called Raiden.

Considered a standalone game despite being an Updated Re-release of Raiden II, it looks like the base game at first glance, but it has a lot of new content, such as a more elaborate scoring system, three different game modes, and the addition of music from the first Raiden to the soundtrack. The console port was released only in Japan for the PlayStation in 1995.

A spinoff of the Raiden series, taking place exclusively in outer space and featuring some different gameplay in the form of temporary secondary weapons. This is the game that the Judge Spear and Blue Javelin ships come from. Developed on the Seibu SPI arcade hardware, which the Raiden Fighters series also uses.

The first game in the series developed by MOSS after Seibu Kaihatsu disbanded in 1998; also released for the Playstation 2 and the PC. It replaces the Bend Plasma with the green Proton Laser. The Windows PC versions were initially exclusive to Japanese computers before rereleased internationally on Steam eight years later.

Reintroduces the Bend Plasma weapon (which was not included in Raiden III). The best known feature of this game is its inclusion of new arrangements of music from Raiden and Raiden II as part of the soundtrack.

The first in the series to include an elaborate story to flesh out many of the mainstay narratives in the series that had gone unexplained until this game. It also introduces game mechanics changes from those long-standing in the series, with some elements from the Raiden Fighters games. It is also the first game in the series to have no arcade releases at all, being a straight-to-console title.

Not to be confused with the thunder god of Mortal Kombat, or the Metal Gear character of the same name, or the character from Honkai Impact 3rd, or the big wrestler from Fatal Fury, or the Virtuaroid from Virtual-ON...

The series exhibits the following tropes: