Would you please... welcome to the stage... Sloan!
Intro, "The Good in Everyone" 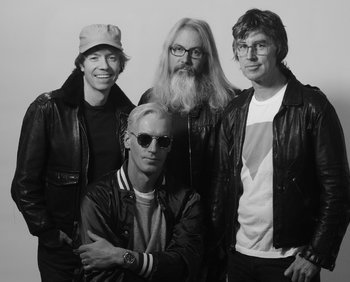 Sloan is an Canadian Alternative Rock/Power Pop band based in Toronto, Ontario. Formed in 1991 when Chris Murphy and Andrew Scott met at the Nova Scotia College of Art and Design in Halifax; Jay Ferguson and Patrick Pentland soon joined to round out the set. They are known for the "Democratic" nature of their songwriting partnership, with each member having at least two songs featured on each album (with the exceptions of Smeared (1992) and Action Pact (2003)), as well as their unchanging lineup (the same four members since 1991; multi-instrumentalist Gregory MacDonald joined in 2006, primarily performing electric piano, which beforehand had been performed by Ferguson and Scott).

In 1992, they formed their own record label Murderecords. While it initially was just to self-release their own records, it did end up signing a number of Canadian indie rock groups during the 90s. It has since returned to its initial purpose of focusing on Sloan releases though it occasionally releases records from other acts.

Tropes Associated with Sloan:
One thing I know about the rest of my life
I know that I'll be living it in Canada
And the joke is
When he awoke his
Body was covered in Coke fizz