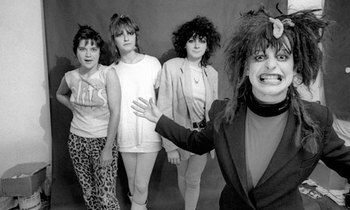 The Slits were a Post-Punk band formed in London in 1976, known for their innovative style combining the volume and rage of Punk Rock with more exotic influences that ranged from Dub, Reggae, World Music, and Funk. The group in their most active period revolved around the core lineup of Tessa, Viv and Ari, with collaborators including drummer Bruce Smith, Don Cherry and his daughter, Neneh Cherry. Their first album, Cut, is known as one of the most important records of the post-punk era.

The Slits provides examples of: