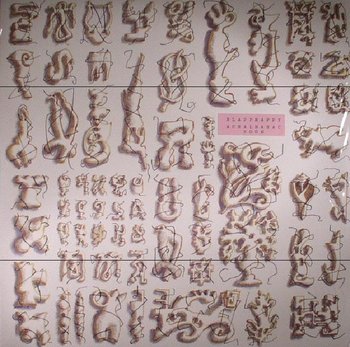 1980 (or 1982) album cover. Designed by Blegvad himself
Advertisement:

Casablanca Moon is a 1974 (or 1973 or 1980 still) album by Slapp Happy, the history of which is pretty complicated. It was first recorded by the band in 1973 with ascetic, austere instrumentation. Its genre can be definited as a mix of art-pop and avant-pop with a share of progressive-pop. The band's label, Polydor Records, rejected it and its release was cancelled.

It was rerecorded in 1974 for Virgin Records with the addition of many instruments so that it sounded much more lush. The refreshed material was released with the album under two names: Slapp Happy and Casablanca Moon.

The band members, Anthony Moore and Peter Blegvad, were not entirely satisfied by the result and later managed to reissue the original versions of the tracks which were more to their liking. It happened in 1980 already after Dagmar Krause had left for Henry Cow and Moore and Blegved had parted ways too. Now everyone can compare the versions and decide which are better in every case.

The 1980 release was first named Slapp Happy or Slapphappy. Which deninitely confirmed who were the band behind the music and the lyrics so that no-one would doubt about that. Probably. Then in 1982 it was reissued once more as Acnalbasac Noom.

The new reissue of 1990 contained four worthy bonus tracks added to the 1980 version of the album.

For the 1974 release known as Casablanca Moon or Slapp Happy:

For the 1980 release, known as Slapp Happy or Slapphappy which later in 1982 was reissued as Acnalbasac Noom:

In 1990 four bonus tracks were added to the new release of the latter version: