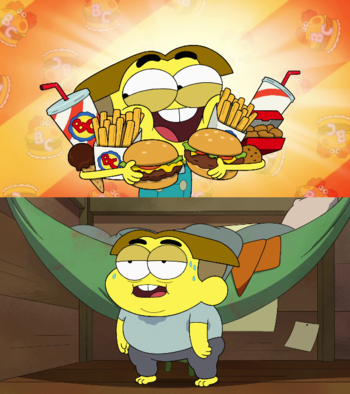 "What do you get when you guzzle down sweets?
Eating as much as an elephant eats.
What are you at, getting terribly fat?
What do you think will come of that?
I don't like the look of it."
— Willy Wonka & the Chocolate Factory (1971)
Advertisement:

Our protagonists may be seen eating junk food whenever they can (sometimes being integral to the plot), but no one's really raised a big stink about it, right?

In comes this Stock Aesop, which does its damnedest to demonize too much junk food and glorify exercise. Generally, it involves one or more characters getting hooked on some sort of junk food, making their health deteriorate badly and expanding their waistline. Usually, the rest of the group (if it's one person addicted) or the sole outlier (if the whole group's addicted) will have to get things back to normal.

This won't stop the writers from having the protagonists eating more junk food in the next episode, though. After all, Status Quo Is God.

These morals tend to get heavy-handed which, combined with their increasing frequency since the Turn of the Millennium, can quickly make them the bane of viewers. In all fairness, though, many children in developed countries have been getting heavier to the point of obesity in recent years (as have many adults, for that matter), so obviously the higher-ups want to tell people about it.

One scary if somewhat silly way to present this aesop that sometimes shows up in horror, sci-fi and fantasy works is to show that fatter humans are more desirable prey for people-eating monsters and aliens. It moves the aesop into much darker territory, but the message can easily get lost because being eaten by a Martian isn't likely to happen to any audience member.

Often brought up in The Fat Episode.

Compare If It Tastes Bad, It Must Be Good for You, Weight Woe, and Nutritional Nightmare.

Contrast Balloon Belly, Temporary Bulk Change, Fat and Proud and Fat Comic Relief (which are about fat people Played for Laughs) and Acrofatic (which is about fat people that can achieve impressive physical feats despite their weight). Also contrast Be Yourself if a character slimming down has a negative effect on their character or they're not doing so except to please someone who otherwise would value them less. See also Diet Episode. Compare Disease-Prevention Aesop, Missed Meal Aesop, Sleep Aesop, and Anti-Alcohol Aesop for more health-related Aesops.

Sailor Moon advises that your weight doesn't make you ugly, to talk to a doctor regarding weight concerns, and for the love of God, don't starve yourself.

Alternative Title(s): If It Tastes Good It Must Be Bad For You, Junk Food Is Bad

Sailor Moon advises that your weight doesn't make you ugly, to talk to a doctor regarding weight concerns, and for the love of God, don't starve yourself.