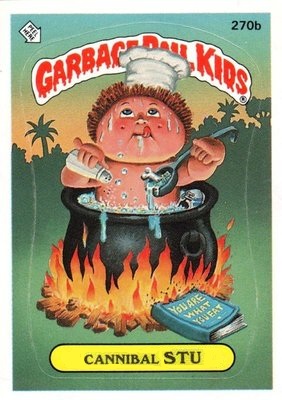 How do you take the already disturbing concept of cannibalism and make it even more screwed up? Why, by making the diner what's also being served, of course!

The reason why someone makes a meal of themselves tends to fall under one of the following three categories:

A character eating a clone or duplicate of themselves also counts. Also see I Taste Delicious, which tends to be about characters finding themselves irresistibly delectable after becoming or being covered in food (try to keep examples of that on its page). Some of the more disturbing examples of Let's Meet the Meat (like the image of that page) can involve this.

Your body will also actually do this automatically in the later stages of starvation; breaking down redundant organs and muscle to keep the more vital parts running. Autophagy is a similar process of self-digestion, and is naturally carried out by cells to recycle defective or worn-out organelles to get their materials back for later re-use.

Not related to the band Pop Will Eat Itself, or You Are Who You Eat.