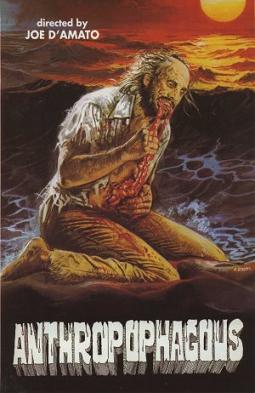 It's not fear that tears you apart... it's him!

Imagine you are on vacation. You and your friends have picked out a lovely Greek island to stay at, with beautiful scenery, beaches to stroll along, and plenty of opportunity to just relax, without a care in the world. However, this remote island is not the paradise it seems. It is strangely uninhabited, save for a blind girl who doesn't know what happened to everyone else. However, there is one other here: a man the girl says smells of blood. And for him, it is now dinnertime.

The Anthropophagus Beast was co-written by D'Amato and Luigi Montefiori, who were long-time associates. Montefiori often co-wrote and held lead roles in D'Amato's films under the pseudonym of George Eastman. He's credited as George Eastman as both the co-writer and star of this movie.

In the documentary Totally Uncut 2 D'Amato stated that the film was solely made for foreign markets; both the director and Montefiore claim that even though the film did very well in other countries it was a flop in Italy. Montefiore also revealed that he has never liked the film, though he did enjoy making it.