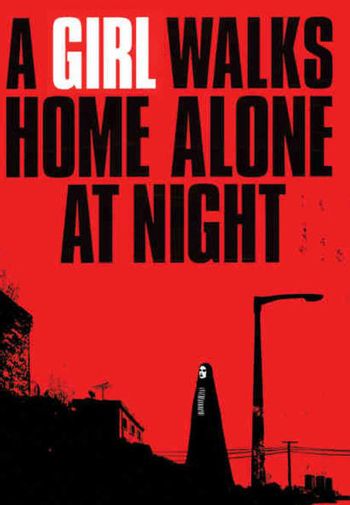 A Girl Walks Home Alone at Night is the 2014 first feature film of Iranian-American writer/directer Ana Lily Amirpour. It's a film about vampires, prostitution, teenage angst, and drug use.

The film takes place in Bad City, a fictional hellhole in Iran. A young man named Arash (Arash Marandi) is trying to get by while taking care of his heroin-addict father Hossein (Marshall Manesh), all the while being harrased by pimp/drug-dealer Saeed (Dominic Rains). Eventually, he resorts to stealing a pair of earrings in order to pay Saeed back and reclaim his beloved car. While waiting for Saeed by the gate, he sees a girl in a black chador (Sheila Vand) leaving his apartment. This mysterious girl enjoys skateboarding, listening to music, and killing the bad men of Bad City...