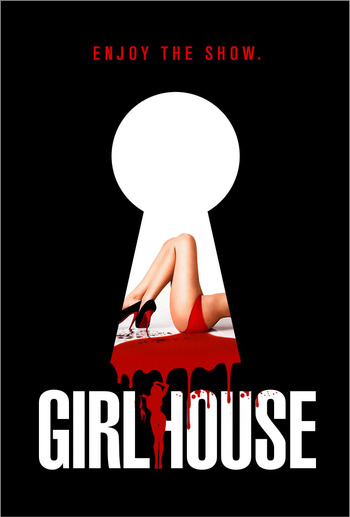 It stars Ali Cobrin as Kylie a student whose father recently passed away, and Slaine as loverboy, a psychopath who stalks her.

To have the means to study and help her mother out financially, Kylie sees no other alternative than to work for Girl House, a website that that streams the uncensored lives of the girls living inside its walls in a sort of x-rated reality show, 24/7. It is supposedly "the most secure, technologically advanced site of its kind" said to be untraceable, unhackable and "the Fort Knox of websites."

The girls of the house have free rein over what they choose to do (or show) in the house, though incentives are in place for the girls who bring in the most traffic.

One of their thousand loyal watchers is a man who goes by the handle "loverboy" - a creepy loner who happens to be very good with computers. When loverboy is rejected by several of the girls in the house, he decides to track down the "untraceable" Girl House and put on his own show, hacking and slashing his way through the house's occupants.