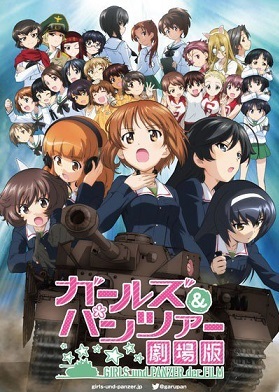 This is a film about girls and their panzers. What else did you expect?
Advertisement:

Some time after the end of the 63rd National High School Sensha-dō Tournament, Oarai celebrates their victory with an exhibition match, featuring Oarai teamed up with Chi-Ha-Tan Academy against St. Gloriana and Pravda. After the match, they return to their school ship to find out that despite their victory, the school is still being closed down. Miho and the Senshado team must find a way to win back their victory and reestablish Oarai.

The movie was originally announced

for release in 2014, but got pushed back to Summer 2015 and then finally Girls und Panzer der Film was released on November 21, 2015 in 77 theaters across Japan. In keeping with this anime's surprising popularity, in spite of a relatively limited release, the movie's current gross is over 2.5 billion yen with over 1.4 million tickets sold at the Japan Box Office as of August 13, 2017

. It was, in fact, still playing in some theaters the day the Blu Ray was released. It's currently ranked 3rd highest grossing late-night TV anime based movie behind Love Live! The School Idol Movie and Sword Art Online The Movie: Ordinal Scale.

The home video releases include the OVA, showing what happened to Alice after the movie ended. Do note that it's not released in other countries.

If you are looking for tropes from the original television show, click here.