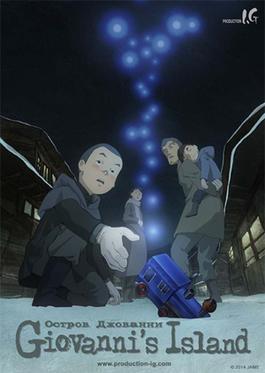 Giovanni's Island is a 2014 anime drama film. The story follows two brothers, Junpei and Kanta, who live on the island of Shikotan, shortly after World War II. On August 15, 1945, Soviet soldiers land on Shikotan and occupy the island. Junpei and Kanta, who live with their grandfather, a fisherman, and their father, the head of the firefighting force of the village, are forced to move to the stables while the Russian commander's family, among them the commander's daughter Tanya, move into the main house. They boys' uncle, Hideo, recruits Junpei into helping him set up a smuggling ring and what happens next changes all their lives forever.

It was directed by Mizuho Nishikubo and produced by Production I.G and co-produced and presented by the Japan Association Of Music Enterprises (JAME).

The film makes frequent allusions to Kenji Miyazawa's Night on the Galactic Railroad, and borrows the name in its title from that of the book's protagonist.