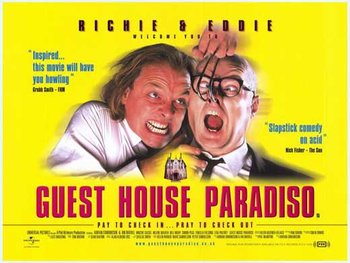 "And as we always say at the Guest House Paradiso: Have fun, don't go in the water if you know what's good for you, and try not to get shit on the sheets!"
— Richie
Guest House Paradiso is a 1999 Slapstick comedy film written by and starring Rik Mayall and Adrian Edmondson. Directed by Ade Edmondson and also starring Simon Pegg, Vincent Cassel and Bill Nighy. An offshoot of Rik and Ade's series Bottom, it features main characters Richie and Eddie running a cheap and nasty hotel.
Advertisement: