Film / Girl with a Pearl Earring 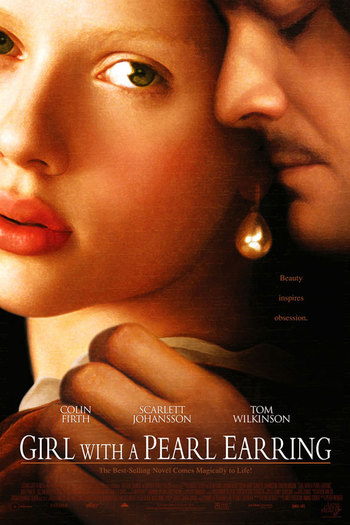 Girl with a Pearl Earring is a 2004 film directed by Peter Webber, based on the novel of the same name. It garnered numerous awards both in the States and abroad. They include three Academy Award nominations, a Best Photography Oscar, and two Golden Globes for Best Actress and Best Score. In England, it won a London Critics Circle Film Award and a British Independent Film Award, both for Best Actress. It stars Colin Firth as Johannes Vermeer, Scarlett Johansson as Griet, and Cillian Murphy as Pieter.

Delft, Holland, 1665. After an accidental kiln explosion leaves her father blind and her family desperately poor, Griet becomes a maid to the Vermeer family. She is to clean the master's studio. Though the Vermeers appear to be wealthy, at least to Griet's eyes, she soon finds out that this is a façade and the family is actually in ever-deepening debt and they can barely afford to pay her.

As Griet folds herself into the life of this strange family, she finds herself growing closer to the master because they see the world in much the same way. She is the only member of the household allowed into the studio, which sparks jealousy in Vermeer's daughters and especially in Vermeer's wife Catharina. This only grows worse as Griet begins to help Vermeer in his work, mixing paints. However all of this is necessary in order to please Vermeer's patron, van Ruijven, who is their main source of income.

When van Ruijven takes an interest in Griet, everyone knows exactly what that means for her. In order to keep her position, Griet must fight her feelings for her master, not offend his patron, and keep her head down around Catharina. It's only a matter of time before something gives way.

Girl with a Pearl Earring includes examples of the following tropes