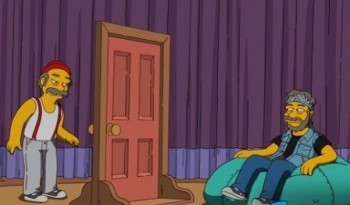 A Midsummer's Nice Dream is the 16th episode of the 22th season of The Simpsons.

1970s stoner comedians Tommy Chong and Cheech Marin (who apparently were born in Springfield and worked as weathermen on Channel 6 when they accidentally inhaled that fateful marijuana smoke) decide to break up after Chong grows tired of doing the same routine over and over. Both get new comedy partners — Homer pairs up with Cheech to become "Cheech and Chunk" while Principal Skinner joins Chong to become "Teach and Chong." Meanwhile, Marge stages an intervention for The Crazy Cat Lady over her hoarding problem.