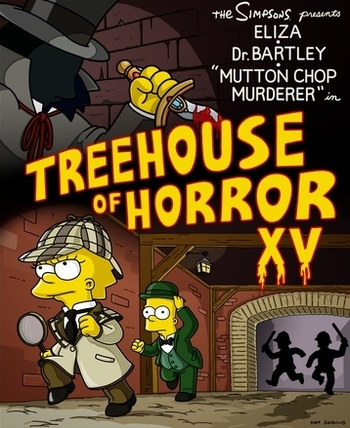 This year sees Ned gaining the power to predict doom after a head injury, a Victorian-era parody with Lisa and Bart as detectives out to catch a prostitute killer, and a "fantastic voyage" inside Mr. Burns' body.

Homer attempts to get a frisbee off his roof with a bowling ball. One of his attempts hits Ned Flanders in the head. Later, in the hospital, Dr. Hibbert informs Ned that he nearly died— of a brain tumor. The bowling ball actually saved him by knocking it out of his head. Hibbert shakes Flanders' hand, and Flanders sees a vision of Hibbert falling to his death. In the real world, he freaks out and pulls his hand away.

Hibbert sees how pale he looks, and opens the window to get Flanders some fresh air. The Simpsons come to visit, and Homer asks Dr. Hibbert to get his frisbee off the ledge. While reaching for it, Hibbert falls out the window. He realizes that this is going to hurt and injects himself with a painkiller. That done, he hits the ground and dies— in the exact manner that Ned predicted.

Ned is quite freaked out by this, and tries to reassure himself that it was just a coincidence. This belief is shaken after he catches Hans Moleman after Hans's shoes were thrown over a telephone wire while he was still wearing them, and sees a vision of Hans being attacked by alligators. Startled by the vision, he drops Hans into a sewer through an open manhole, at which point Hans is attacked by alligators.

The now quite freaked out Flanders asks God why he has these visions. He hits his hand against a building, which turns out to be a theater showing Rosie O' Donnell's new musical, which he sees will close after 3 performances. He says he didn't need any power to know that was coming. Homer walks up, looking for his frisbee. Ned tells Homer of his new power of foretelling death, and Homer asks Ned to do it to him.

Ned reluctantly complies, and sees Homer being shot three times from behind— and the shooter is Ned Flanders himself. Flanders pulls away, terrified.

He later tries to move, but Homer doesn't believe that Flanders will kill him and does believe in Tempting Fate. Homer gets Wiggum to give Homer his gun, and gives the gun to Flanders, urging Flanders to shoot. While Homer taunts Flanders, he sees a vision of Homer pressing a button at the nuclear plant— and causing Springfield to be destroyed. Flanders warns Homer, but he's unphased and goes to work anyway.

At the plant, Ned tries to tell Homer not to press the Core Destruct button, but all Homer hears is "Press...destruct...button". He does so, and while Homer is reaching for the button (and taking a long time with it), he grabs a sleeping security guard's gun and shoots Homer... just like he saw in his vision.

Homer proceeds to flop all around the console he's at, eventually pressing the Core Destruct button with his tongue. Springfield is destroyed, and both Ned and Homer go to heaven. They meet the rest of the Simpsons there, and Marge tells him that if he was trying to get out of cleaning the garage, it won't work, as the garage is also in heaven.

At this point, God interrupts and gives Homer "what he deserves"— his frisbee.

Four Beheadings and a Funeral

London's prostitutes are being killed by a Jack The Ripper-esque Serial Killer called the Muttonchop Murderer because of his muttonchop beard style. The Scotland Yard investigates, and their chief, Wiggums, says they should dust the latest victim for prints. When his men ask him what he meant, he clarified that the prince was coming by, and he wanted the victim cleaned up by then.

Lisa and Bart show up, as Master Detective Eliza Simpson and her easily amazed sidekick, Dr. Bartley. She asks what clues they've found, and Wiggum says that they've already caught the killer. He shows the suspect, Apu (who does not have muttonchops). He says that Apu is clearly responsible for the murder, and tells the police to "lock him up until we find someone darker". Apu protests that he's not a killer, just a purveyor of disgusting British food like eel pies. Wiggum loves eel pies, and he eats one of Apu's wares as Apu is being dragged away.

After Apu has gone, Marge Simpson shows up, with a story to tell. She says she saw a strange man, who dropped a bloody, curvy knife and then ran away. Wiggums gives Lisa the knife, but says that this case was beyond even her skills. She takes that challenge.

Later, Lisa talks with the Comic Book Guy, a dealer who sold the knife as part of a set, the Seven Swords of Osiris. He tries to sell her a book that goes with it, but she just wants to know who bought it. Comic Book Guy checks his records. While Lisa and Bart look around the shop (and find Ned Flanders as a shrunken head), Comic Book Guy stumbles out of the other room with a record book, crying "Help! Help! Murder!", and then falls down dead, with a curvy knife in his back. The window behind him is open.

Lisa takes the ledger, and uses it to learn who bought the Seven Swords of Osiris, while a muttonchop-wearing shadow stalks them. She finds out that they were sold to one C. Ebenezar Burns, evil industrialist and opium addict. They find him in Mao's Den of Iniquity, which is run by Moe. He says that he once possessed the entire collection— but then sold them all to buy opium. Lisa asks who he sold them to. He says he sold them to a fat man with sideburns— like the one in a greatcoat and top hat right behind them.

The man turns out to be Homer. He runs away, but is grabbed by Wiggum. When Wiggum is queried as to why he's in an opium den, he says it's the only way he can get Ralphie to go to sleep.

Lisa and Bart walk through the city, happy that the Muttonchop Murderer has been caught. But then they see another Sword of Osiris in the chest of another prostitute. But that means the murderer is still on the loose, and the guy they have is innocent. Lisa takes out the sword and sniffs it.

The next day, Homer is about to be hanged for the actions of the Muttonchop Murderer. He pleads for mercy, saying that he's not a murderer. Wiggum is about to pull the lever, when Lisa shows up and tells him not to, as Homer is innocent. Her evidence? The blade used in the latest murderer smelled of eel pie— like the one Wiggum is eating at that very moment.

Wiggum defends himself by saying that a lot of people like eel pie, but a police officer then takes off Wiggum's hat to reveal that he also has muttonchops. When Lisa asks him why he did it, he reveals that he wanted to come up with a case that she couldn't crack. He then runs away to a hot-air balloon nearby, and floats away. He gloats to Bart and Lisa that they'll never catch him, before his balloon is ripped apart by Kang and Kodos in a steampunk spaceship.

Wiggum: Remember me for my police work and not the murders!

Kang and Kodos fly into the sunset, laughing about destroying Earth's fleet. We then cut to Ralphie and Wiggum at the opium den, where Ralphie tells his father that he just had the strangest dream. Wiggum informs Ralphie that he's still in it, and we zoom out to an ice castle surrounded by winged dinosaurs, a chicken pulling a carriage, a sea monster, and other Real Dreams are Weirder material. Ralphie and Wiggum fly out on the bed.

In The Belly of the Boss

The Simpsons attend a science fair, where Professor Frink demonstrates his latest invention, a miniaturization ray. He uses this on a giant capsule full of nutrients in the form of balls. The ray works as expected, and Mr. Burns eats the pill - only to discover too late that Maggie (who had thought the capsule was a ball pit, and jumped in to play) was inside.
Frink quickly assembles the Simpsons into a crew that can pilot a submarine and go into a "fantastic voyage" into Mr. Burns' body, in order to save Maggie from being digested. After being injected into Burns' body, Frink attempts to guide them from outside, but Homer ignores Frink's instructions and ends up with the sub getting stuck on Burns' heart, requiring effort to get it unstuck.
After using a nerve impulse to reach Burns' stomach, they manage to rescue Maggie seconds before the capsule is completely digested, but due to Maggie's weight, the ship now doesn't have enough power to move. Homer is forced to stay behind, but consoles himself with a marshmallow in Burns' stomach. The ship leaves Burns' body just before its miniaturization reverses, but they are unable to go rescue Homer before he grows again.
The Simpsons - and Burns - go to a restaurant, where Homer complains he cannot eat since there is no hole available, but Burns is confident they will eventually solve the problem and leads him into a dance to the tune of "I've Got You Under My Skin", with characters from the entire episode joining.