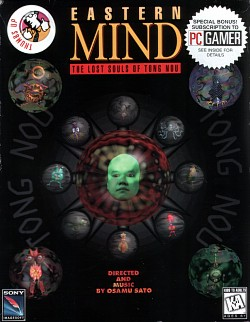 , which pretty much sums it up.
Advertisement:

Eastern Mind: The Lost Souls of Tong-Nou is a Japanese Point-and-Click Game by OutSide Director Osamu Sato, first released in 1994 for the Apple Macintosh. An English translation and PC port followed in 1995.

Eastern Mind: The Lost Souls of Tong-Nou is also a... rather strange game.

The game starts out with a guy named Rin discovering that his soul was stolen by the island of Tong-Nou—presumably to eat it—and if he doesn't get it back then he'll "weaken and eventually die in emptiness." Rin decides to go and retrieve his soul, but before he does, his friend Yashiro gives him a temporary soul which will last for forty-nine days. When he gets there it turns out that the island is a giant green human head floating in darkness, and in order to continue your quest, you have to enter the head through one of its orifices. Things only get stranger from there. By the way, it was created by Osamu Sato, who is also responsible for LSD: Dream Emulator, which explains much.

There was a sequel, but it was even more obscure and was only released in Japan, so for years virtually nothing was known in the West except that it was called Chu-Teng ("中天"). However after years of searching, a copy was unearthed

Please put tropes for Chu-Teng on its own page!