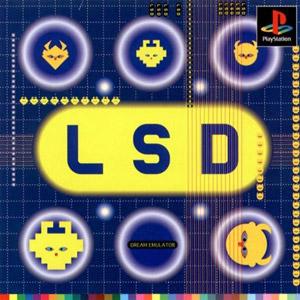 Quite the accurate title.
"You can hold X to run. But I don't advise doing that in this game, because you're liable to run into a wall and have, like, a demonic head explode out of it while little elephants float out of the sky as a man in a huge cloak comes up behind you and the screen turns blood red. And, yes, that does happen in this game. I'm not kidding."
— Azuritereaction's YouTube commentary of the game.
Advertisement:

LSD: Dream Emulator is a PS1-era game created by Osamu Sato (who also made Eastern Mind: The Lost Souls of Tong-Nou), and only released in Japan. It's a Cult Classic, especially among Let's Play groups. There is no goal, no combat, nothing but walking around the completely random environments. The main appeal for players is its insanity — one day, you might see a line of elephants walking into a pit, while other times you might encounter the Grey Man, the closest thing to a recurring villain. Imagine a randomized Yume Nikki.

The game also does one particular thing that's completely horrible — it gets scarier as it goes on. The more you dream, the more bizarre and messed-up textures and events you will encounter.note There's four "main" sets of textures counting the normal one, and based on some algorithm the more unsettling textures become more common the more days have been played. The Grey Man will appear more often. One person played the game so long that the system it uses to scarify things broke, and every texture was replaced with glitchy black.

Perhaps the scariest thing about the game is that it's all real, in a sense. One of the employees at the company who made it, Hiroko Nishikawa, was having very disturbing dreams and recorded it all in a dream journal. She later presented it to the company, and it got made into this game. If you want to read the original journal, it has been released as Lovely Sweet Dream, but it's even more difficult to find than the game itself.

The game has a reputation for making you think you've figured everything there is to figure out, and then doing something very bad to you.

There also is a fan-made remake in the works. The developer and the fan-remake's development progress here

. It's classified as LSD in HD according to how it is being described. Current version available for download here

. A fan-translation of the original PlayStation game was released on May 1, 2020 and can be downloaded here