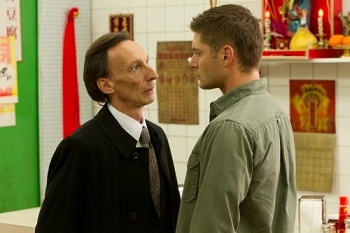 Dean goes to Death to make a deal to bring Sam's soul back. Death agrees, on the condition that Dean put on his ring and do his job for one day, under the guidance of a Reaper, Tessa. At first, Dean does well, reaping a robber who got shot while holding up a convenience store and an overweight man who has a heart attack. But when his next victim is a twelve-year-old girl with a heart defect, he refuses. By upsetting the natural order of things, Dean causes the death of a nurse. Her grief-stricken husband, driving home drunk, nearly crashes into a bus and causes more deaths, but Dean removes the ring in order to stop him. Even though he has already lost the bet, he returns to the hospital and reaps the girl in order to prevent more unnecessary deaths.

Meanwhile, Sam summons Balthazar and asks for his help in preventing Dean from returning his soul. Balthazar gives him a spell that requires the blood of Sam's father figure. So Sam attempts to kill Bobby, eventually tying him up in his own basement. Sam is just about to slash Bobby's throat when Dean returns and punches him out.

Dean lost the bet but, since he learned an important lesson, Death holds up his end of the deal and returns Sam's soul to his body.