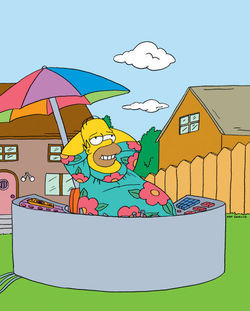 Mr. Burns decides to help get the workers at the Power Plant in shape by implementing a mandatory ten-minute morning calisthenics program. Homer, the most obese and physically unfit worker on the plant, detests the thought of daily exercise, notices that Charlie, a fellow employee, gets to work from home following an injury, and immediately begins scheming to gain this "perk" for himself. A bit of research reveals that anyone who weighs three hundred pounds or more qualifies as disabled, and he quickly realizes that he can use one of his greatest loves—eating—to achieve his dream of working from home (which he imagines will consist of using his usual terminal while Marge flatters him and Flanders suffers from the rat race). Dr. Nick advises Homer to eat from the "neglected food groups"—including "whipped, congealed, and choco-tastic"—to reach his goal weight.

One Shopping Montage of disgustingly fattening foods later, Homer has begun packing on the pounds at an alarming rate, worrying Marge and Lisa, but earning Bart's approval. Homer eventually tops out at 315 pounds, qualifying him as disabled (and requiring him to wear a flowered muumuu and "fat guy hat"). True to his word, Mr. Burns installs a computer terminal in the Simpsons' home, tasking Homer with the duty of repeatedly venting the plant's nuclear gas to prevent a core meltdown. After some initial confusion, Homer discovers that all he needs to do is press the "Y" button to complete the assignment. At first, things seem wonderful—especially after Homer rigs up a drinking bird to hit the button for him—but he soon discovers that being morbidly obese isn't what he dreamed it would be. Marge admits that she no longer finds him sexually attractive, the general public bullies him, and he cannot enjoy things such as a trip to the movies, as the cinema lacks the ability to accommodate him.

Upon returning home from an unauthorized break, Homer discovers that the drinking bird has tipped over, and the gas build-up has reached a critical point that requires a manual release. With his fingers too fat to dial a telephone, Homer begins a mad dash to the power plant, eventually commandeering an ice cream truck to reach the site in time. All of the employees are too excited at the thought of ice cream to listen to Homer's warnings, and somehow miss the leaking gas tank that's ten feet away, so he's forced to climb the vent to reach the manual shutdown button. Unfortunately, Homer's newfound flab shatters the thin ladder leading to the button, and it looks like all is lost... but thankfully, his massive girth is just big enough to plug the tank and prevent the catastrophe.

Mr. Burns rewards Homer (who's still stuck in the tank while being decontaminated) with a medal and a promise to grant any request he may make. Homer, realizing all of the trouble his excess weight has caused, asks his boss to make him thin again. Mr. Burns vows to do so, and it seems like a Training Montage will soon begin—but given that Homer is too fat to do even a single sit-up, the exasperated Burns decides to pay for liposuction instead.