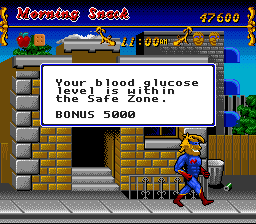 Hooray.
"Captain Novolin is a game that teaches you about diabetes. However, this game doesn't tell you how to manage your diabetes. Your Doctor will tell you about your individual care. WARNING: ANY CHANGE OF INSULIN SHOULD BE MADE CAUTIOUSLY AND ONLY UNDER MEDICAL SUPERVISION."
— The game's intro blurb
Advertisement:

Hello TV Tropes! I have diabetes. Is there anything special I should know before describing Captain Novolin?

Captain Novolin is an Edutainment Platform Game developed by Sculptured Software and published by Raya Systems for the SNES in 1992. It tells the heartwarming story of an Inspirationally Disadvantaged superhero, whose superpower is the fact that he happens to have diabetes. As such, for him every day of his life is an epic struggle against his illness — you must fight against evil alien invaders who have taken the form of malicious junk foods, all the while making sure to eat regularly and keep your blood sugar levels consistent (and check your feet for sores and blisters).

In case you couldn't tell from the above paragraph, the game was intended to help children learn about diabetes. The game was endorsed by Novo Nordisk, manufacturers of the Novolin brand of insulin, from which the game takes its name. Raya Systems also released other educational games with similar themes, such as Packy and Marlon, a game starring two elephants with juvenile diabetes.