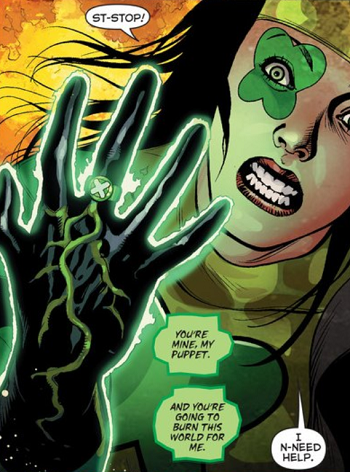 This is when an Empathic Weapon not only has a mind of its own, but also has very definite ideas about what it should be used for, and is willing to act on it. During combat, it will take control of its bearer's body (or at least the arms) and direct the fight itself. Note that it characteristically neglects to ask permission of its bearer beforehand.

Depending on the personality of the weapon, this can range from helpful (particularly for the novice hero), to annoying, to dangerous, to outright suicidal. Being made mostly of metal, it is often unconcerned with the fragility of human flesh, and the need for things like backup or an escape plan. The weapon is most likely to take control either to force a fight (when the bearer would rather either not get involved or actually run away), or to stop the wielder from attacking a certain type of person (women are a common target). These problems are compounded when it is an outright Evil Weapon.

In visual media, expect scenes of the wielder being dragged helplessly behind the weapon. The bearer's lack of control is often indicated through the use of Marionette Motion.

In addition, it is frequently a Talking Weapon, and may actually be a Soul Jar or Sealed Badass (Good or Evil) In A Can. If it particularly likes or needs you, it can end up being Loyal Phlebotinum and/or a Clingy MacGuffin.

While this can occur with many types of weapon, it is most commonly found in swords.

This isn't something that necessarily happens in Soviet Russia.

Compare Flying Weapon where the weapon doesn't bother to keep a human attached to one end. Subtrope of Animate Inanimate Object, Empathic Weapon and People Puppets or Demonic Possession. Contrast Equippable Ally, where you're wielded as a weapon.