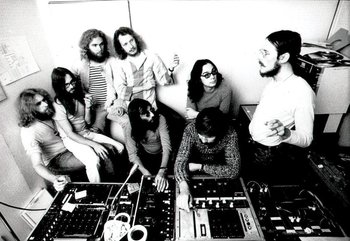 Faust in the early 70s. The members Back from left: Werner "Zappi" Diermaier, Jean-Hervé Péron, Rudolf Sosna, Gunther Wüsthoff, Hans Joachim Irmler, and Arnulf Meifert. Front: Uwe Nettlebeck (left) and Kurt Graupner (right).
"FAUST is definitely not for the faint-hearted person and can only be recommended in small doses because it is very dangerous for the sanity of the average proghead. DO NOT - and I repeat this - Do not feed this to a pregnant woman or a mentally fragile person - although you could give it to Techno Heads - as they would greatly enjoy this."
— Prog Archives' page

on the band.
Advertisement:

Faust (often stylized as faUSt) are an experimental German band formed in 1971 by Uwe Nettlebeck, a music journalist who wanted to form a rock band that sounded like no other rock band at the time, and greatly succeeded (though it wasn't long before artists started taking influence from them, most notably Slapp Happy and Henry Cow). The initial lineup was as followed:

They soon entered a deal with Polydor Records, who hoped for a band that could compete with the likes of The Rolling Stones, The Kinks, and The Small Faces. Their debut, Faust, was as far away from that as possible. The record was very experimental, featuring abrupt sound collage segments and the "music" often sounding disjointed and switching gears when needed. While commercially unsuccessful, critic praised it for its experimental sound. The next album, Faust So Far, was more commercial in that it actually had songs: 9 of them each with its own distinct theme. This album was the one that got them more noticed, and is considered important to the Krautrock scene.

Around this time, Polydor had dropped them from the label. Nettlebeck was able to successfully sign them up to Virgin Records instead. The first album released by the group on the label, The Faust Tapes, was assembled from a series of tapes Nettlebeck had created of Faust experimenting with sound. The deal between Nettlebeck and Virgin was that Nettlebeck would give the tapes for free, and Virgin would compile them into an album and sell it for as low a price as possible. This price was 49 pence (around 64 cents in US dollars), and wound up selling exceptionally well due to this marketing scheme... only most people would listen to it once and then return it. The nature of the music on this record was insanely experimental, and would frequently switch between avant-garde experiments on random instruments to a folksy ballad and back again.

Their fourth album, Faust IV, meanwhile, was a more accessible album with only one track that brought their experimental origins to mind, the 11-minute "Krautrock". The album wasn't well received at first, with prior fans being alienated by the more accessible material and most other people already being too alienated by Tapes to check out anything else by them. However, it has since become Vindicated by History as a classic and one of the defining albums to come out of the Krautrock movement.

Their fifth album was promptly rejected by Virgin, whic led to Nettlebeck dissolving the group in 1975. After the breakup, every member of the band proceeded to completely disappear from public vision. While the official website lists a few concerts from The '80s, and the compilation Patchwork features a few outtakes from the same decade, their activities from 1975-1990 are shrouded in mystery. Most of the members reformed in 1990, and released an album, Rien. They toured for a bit too, with members of Sonic Youth as their opening act. Sadly, Sosner died in 1996 due to alcoholism, and Péron left in 1997. This hasn't ended the reunion though, as they still tour and record as a Revolving Door Band, with Zappi being the only constant member.

Their sound was frequently described as Krautrock, a term the group was less than fond of (see the page quote for Krautrock). Their avant-garde tendencies have also gotten them described as Rock in Opposition, a term used to describe groups like Henry Cow and Univers Zero who actively played rock music in opposition to the general preconceived notion of "rock music". They have also been cited as an influence on Industrial, Post-Rock, and even Ambient.

With Nurse with Wound:

With Omar Rodriguez Lopez (of At the Drive-In and The Mars Volta):

Apart from all the good tropes I gave you, you always felt bad with me...